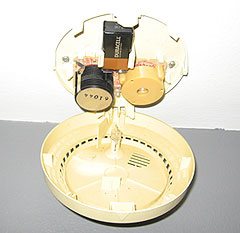 Iowans in need can get a free smoke alarm installed in their house or apartment through an American Red Cross program called Sound the Alarm.

The agency’s Iowa spokesman Josh Murray says home fires claim seven lives every day nationwide, but having a working smoke alarm can cut the risk of death in half.

“We respond to a lot of home fires after they happen, but we also want to be on the front end of it,” Murray says. “How can we help people prepare and maybe avoid some of the dangers that come with that? So that’s what our Sound the Alarm campaign is about, to help people understand the importance of having certain things like a smoke alarm, makes sure it works, make sure it’s functional, make sure it’s in the right place in your house.”

“We will be sending our volunteers out to canvass the area,” Murray says. “We’re going to knock on people’s doors and say, ‘Hey, would you mind us coming in and checking your smoke alarm for you? Do you have them? Do you know if they work? If you don’t, can we install a couple for you?’ We’ll make sure you’re safe and share those home fire resources.”

The Red Cross recommends checking smoke alarms once a month and changing the batteries, if necessary. Smoke alarms should be placed on every level of a home, including inside and outside of bedrooms and sleeping areas. Experts agree that people may have as little as two minutes to get out of a burning home before it’s too late. Iowans who want to help the campaign can visit SoundTheAlarm.org.

“Each smoke alarm costs us about $15, so we tell people, ‘Hey, if you want to give us just $15, you’re gonna buy someone a smoke alarm, or if you give us $45, that’s three smoke alarms, if you want to think about it in that way,” Murray says. “Every every dollar counts and every smoke alarm we put in may be one that saves a life, so they’re all important.”

Volunteers for the program will be in Iowa City on April 30th, Des Moines on May 14th and Omaha/Council Bluffs on June 11th. To make an appointment for a volunteer stop by your home, visit that same website.