You are here: Home / News / Sand says it was inappropriate for Finkenauer to label Iowa judge as partisan 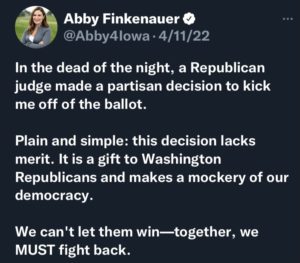 State Auditor Rob Sand, a Democrat, says U.S. Senate candidate Abby Finkenauer’s criticism of a district court judge who ruled against her bid to stay on the June Primary ballot was inappropriate. Finkenauer is one of three Democrats competing to run against Republican Senator Chuck Grassley in November.

“That judge did his job,” Sand said today during taping of Iowa PBS’s “Iowa Press” program. “He worked all weekend to get that ruling issued on a Sunday night in order to give whoever was going to be the losing party a chance to appeal.”

On April 11, Finkenauer tweeted that “in the dead of night, a Republican judge made a partisan decision…that is a gift to Washington Republicans.”

A few days later, the Iowa Supreme Court overruled the decision that had invalidated three signatures on Finkenauer’s nominating petitions and Finkenauer’s name will be on the June Primary ballot. Sand, who is an attorney, said the district court judge Finkenauer criticized is “well-respected.”

“I’m really proud of Iowa’s court system,” Sand said. “We have one of the country’s crown jewels in a non-partisan judicial nominating system…that sorts out the people who want to go in there and be political, and so what we end up with is a body of judges who do a good job of applying the facts to the law.”

Sand indicated he called Finkenauer to say he found her criticism of Judge Scott Beattie to be inappropriate. “I told her what I thought and, to her credit, she said: ‘Thank you for this. We’re going to step back some of this and tone some of this down,'” Sand said. “Politics is tough. I think sometimes having people that you have a decent relationship who you can call and give a perspective to can be useful and, to her credit, when we had that conversation, she decided that she didn’t want to do that anymore.”

A spokesman for Finkenauer’s campaign has not responded to requests for comment on Sand’s statements.

Iowa Congresswoman Cindy Axne, a Democrat from West Des Moines who is seeking reelection, recently said on WHO-TV that criticizing the judge “is probably something that I wouldn’t do.”