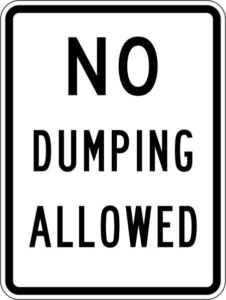 The snow is finally gone and what’s now being found along many Iowa roadways isn’t pretty.

That can be an expensive, embarrassing predicament when there’s a clear, better option to illegal dumping.

“There’s been a big increase in that,” Timmons says. “Go to the landfill. A pickup load, I believe it’s right around $10. You can get rid of a whole pickup load of stuff at the landfill and keep Hamilton County looking good.”

To report illegal dumping in Iowa, call 800-NOLITTR. The Keep Iowa Beautiful hotline offers options to report littering and information on how to adopt a roadway, park, river, lake or other public area.