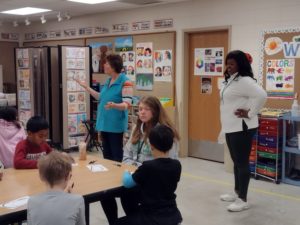 The only Democrat in this year’s race for governor has adopted a tool former Iowa Senator Tom Harkin used in his campaigns.

Harkin, for example, kicked off his 1992 presidential run in New Hampshire with a “work day” at a factory. This February, Deidre DeJear launched what she calls “Workday Wednesdays.”

“If I’m really going to meet Iowans where they are, I’ve got to connect with them in the communities and spaces in which they reside,” DeJear said this past Wednesday.

This week, DeJear served lunch, helped with PE and read to students in a Storm Lake elementary school.

“We’re hearing challenges related to resources in our education system,” DeJear said. “I mean, they want to keep class size small in this class, so the students can have a meaningful experience.”

Last week, DeJear worked on a greenhouse on a farm near Carlisle. In early March, she stocked shelves at a bookstore in Ames. DeJear said wherever she goes, she hears similar stories.

“We want parents to get back to work,” DeJear said. “They’re having to make decisions right now and it’s challenging to find access to child care.”

DeJear will be in a different setting tomorrow night. She’s among the candidates scheduled to speak at an Iowa Democratic Party fundraiser in Des Moines.

“We started back in August. That’s when we launched and we had small crowds of people that were joining, but now people are really getting into it and really excited about what can happen in November,” DeJear said in Storm Lake. “I mean, I had my first overflow crowd in Audubon County, an incredible experience.”

The three Democrats who’re running for the U-S Senate are also scheduled to speak Saturday night at the party fundraiser.