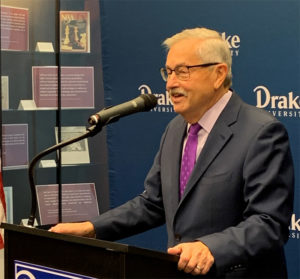 Former Iowa Governor Terry Branstad is launching a new national organization positioned to compete with the U.S. Chamber of Commerce.

In 2020, Republican leaders criticized the U.S. Chamber of Commerce for endorsing some Democratic congressional candidates. In a news release, Branstad said America’s business owners and entrepreneurs “have not been well-represented in Washington.”

The new group is named “The American Free Enterprise Chamber of Commerce” or “AmFree” and Branstad will be its chairman.

The new group’s CEO will be Gentry Collins. Collins is an Ames native who ran George W. Bush’s Iowa campaign and has served as political director of the Republican National Committee and the Republican Governors Association.