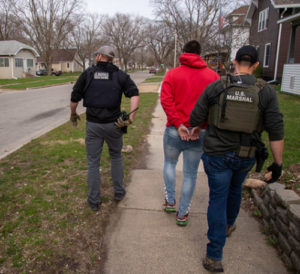 The U.S. Marshals Service has announced that 40 people in Black Hawk County have been arrested over the past four weeks in what the agency calls “Operation Washout – Waterloo.”

According to a news release from the U.S. Marshals Service, the people who’ve been arrested are sex offenders, violent criminals, and fugitives facing state, federal, and local charges. Twenty-two of the 40 people arrested in Black Hawk County are accused of having connections to organized crime or gangs.

The next phase of the operation will involve tracking a handful of fugitives who’ve recently fled the area according to a deputy U.S. Marshal. Over the past four weeks, the U.S. Marshals Service and 10 other law enforcement agencies from the local, state and federal level have been involved in the investigations and arrests in the Waterloo area.