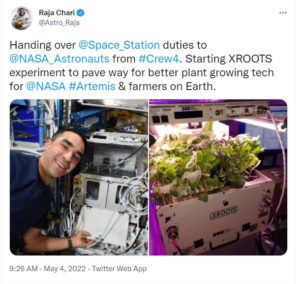 Chari is commander of the SpaceX Crew-3 mission and he and three other astronauts left the International Space Station in a Dragon capsule called Endurance early today. The return flight should take about 24 hours and the capsule will splash down off the coast of Florida late tonight or early tomorrow.

Chari, a Cedar Falls native, headed up what’s called the XRoots experiment, which is one of the largest zero-gravity tests performed on the station. He’s been growing plants without soil, another step toward NASA sending astronauts to the Moon and Mars.

This is Chari’s first space mission, which lifted off in November. He’s only the 8th Iowan to reach orbit, the first to go aloft since Mount Ayr native Peggy Whiston’s last flight in 2017.