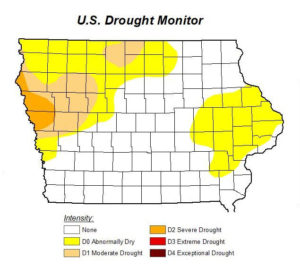 Iowa’s weather pattern is making a big shift this week, from cold and rainy to hot and humid, raising familiar concerns about drought.

Meteorologist Doug Kluck, climate services director for the Central Region of the National Weather Service, based in Kansas City, says some forecasts show improving conditions in the months ahead across the Missouri River basin.

“The forecasters in this case pared-back drought substantially across almost the entire basin, really,” Kluck says. “I’ll cross my fingers and hope this comes true.” While Iowa’s high temperatures last week were mostly in the 40s, 50s and 60s, the week ahead promises highs climbing into the 80s and 90s. Looking ahead, Kluck says there are conflicting signals.

“Short term, temperatures are sort of a mixed bag,” Kluck says. “There’s going to be some warmth and that’s going to be realized in the eastern part of the basin. Precipitation slightly favors above normal, that’s good. Long term, not so good. Above normal temperatures and drier than normal conditions are what the current outlooks say.”

Forecasters had expected the La Nina weather pattern to fade away in the past few months, but that hasn’t happened. “We’re hanging on to La Nina this year through the summer,” Kluck says. “We don’t know if that’s going to hang into the fall or not yet, but La Nina is what we had the last few years and it tends to have a dry and warm aspect to it. So, La Nina is not necessarily our friend.”

The U.S. Drought Monitor map issued for Iowa late last week showed little change from the week before, with no drought at all in roughly 56 counties, 30 counties were abnormally dry, and 10 counties were considered in moderate drought. Parts of three northwest Iowa counties, Plymouth, Monona and Woodbury, were in severe drought.