You are here: Home / Education / Recommendations for schools on Dyslexia moving forward 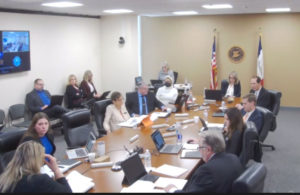 Board of Education meeting. (screenshot from the meeting)

The Department of Education continues working to implement recommendations from the state Dyslexia Board which became law.

The Department’s Brad Niebling gave an update to the Board of Education at their meeting last week and says they’ve been putting together guidance for schools.

“We’ve drafted the first draft of that we took that to the Dyslexia Board in March as well. Gathered feedback from that board and so now what we’re doing we’re taking all that feedback working with our internal staff to make sure that what’s in that guidance also aligns with the other parts of code and rule,” he says.

Niebling is the head of the Bureau of Learner Strategies and Supports. He says they will meet again this week with the dyslexia board to work on the timing and structure for getting the guidance out to schools so it is ready heading into the next school year.

“To make sure that we can leverage the tools that we have at our disposal to accomplish the goal which is also to help schools and families understand what’s in law what’s allowed what’s not allowed, and what’s going to be effective for meeting the needs of these students,” he says.

He says the Ed Department will continue working with districts as they move forward. “There’s additional work that’s gonna be needed around technical assistance — which isn’t guidance — it’s taking it that next step,” according to Niebling. “It’s not everything interpretation of the law, but rather here’s effective ways to pursue that which are a district discretion. And then ongoing consultation and coaching with the field around these two things.”

Niebling says the hope is the guidance and process will be in place heading into the next school year. He says that alone is not going to be what it takes to get results. “Effective teaching in a classroom and effective assessment practices that are aligned with what those students need and we’ve got highly talented teachers that are capable of doing that, and have been working on that every day,” Niebling says. “Our hope is to add value here, and working with AEA’s and the folks that they have, including the dyslexia endorsement and wrapping that into the larger structure of supporting early literacy growth and learning.”

Niebling says they also have started a membership campaign to fill the remaining vacancies on the Dyslexia Board — which are a speech language pathologist or psychologist, and a representative of the Institute of Higher Education.