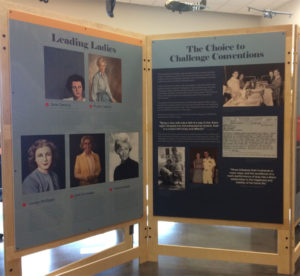 The League of Wives exhibit. (photo from Mike Vogt.)

A new traveling exhibit at the Iowa Gold Star Military Museum at Camp Dodge tells some of the back story in the effort to get information about captured U.S. military members during the Viet Nam war.

“The League of Wives chronicles the efforts of Vietnam-era POWs wives and families to create awareness of the plight of these individuals,” Museum curator, Mike Vogt says. He says there was very little information available after U.S. soldiers and airmen were taken prisoner.

“The North Vietnamese did not follow the Geneva Convention guidelines for the treatment of prisoners, used them for propaganda releases, forced them to sign confessions false confessions a lot of this went unknown,” he says. Vogt says the relatives of prisoners were at first told not to say anything to the media or speak about their concerns.

“The wives after a while began to wonder, you know, is my husband live is my son alive, is our children’s father being treated well,” according to Vogt.” And so after a while, they stopped being silent and they began to organize and they began to create a campaign not only politically but also to petition the government to make more information known about, about these individuals.”

They became fervent advocates for the POW and MIAs — doing whatever they could to facilitate their husbands’ freedom and to account for missing military men by relentlessly lobbying government leaders, conducting a media campaign, holding covert meetings with antiwar activists, attempting negotiations with the North Vietnamese, and encoding messages in letters to their imprisoned husbands.

Lary Spencer of Earlam was held prisoner in Viet Nam for almost seven years after his F-4 was shot down in 1966. Vogt says Spencer’s mother was part of the movement to find out more information.
“And she compiled a wonderful record of the activities of not only of the National League of Families, which was later incorporated about 1970 or 71. And in documenting what happened to the POWs as bits of information became known, what they did after their release, and especially things related to the fate of her son, who would be returned in February of 1973 back to U-S control,” Vogt says.

He says a 2019 book by Heath Hardage Lee put the spotlight on the story that had not gotten as much attention after the prisoners were released. “A number of POWs upon their release spoke gave lectures many of them published books relating their experiences and then the trials and the inhumane treatment,” he says. Lee’s book has been optioned for a feature film, and she is also the curator of the exhibit.

Vogt says the exhibit is open at the Gold Star Military Museum through August 31. Admission to the museum is free and it is open from 9 a.m. to 3 p.m. Tuesday through Friday and Saturday from 10 a.m. to 2 p.m. The museum is closed Sundays and Mondays.