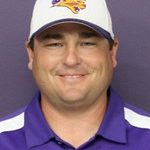 “We are kind of sitting there on the back side of the bubble”, said Jacobs. ” We have an outside shot but we are not in a position where we need to start planning anything.”

UNI earned its first ever at-large bid into the NCAA Tournament a year ago and won a game in a regional at Missouri. Jacobs says there is more competition for the at-large spots this season. The Big Ten played a full nonconference schedule and will have more teams in contention.

“But, we still have a great opportunity in front of us which would ensure us an automatic bid.”

The Panthers have a bye into Friday’s semifinal round and must wait to find out who their opponent will be.