You are here: Home / Fires/Accidents/Disasters / Fire destroys home in Atlantic 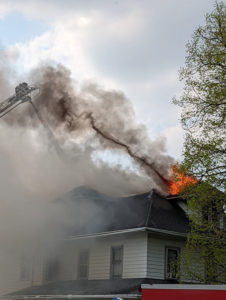 This home in Atlantic was destroyed by fire. (KJAN photo)

A large house in Atlantic that was home to eight people in three apartments is a total loss after a Tuesday afternoon fire.

Atlantic Fire Chief Tom Cappel says it was a difficult fire to fight because of the extreme heat of the day and where the fire was located in the three-story structure. “All of the dormers on top of the house had black smoke billowing out,” Cappel says. “Obviously, we had heavy heat upstairs and working fire at that time so everything just escalated in a big hurry.”

Fire departments from Griswold, Lewis, Marne and Anita also responded, so crews battling the flames inside the house could be rotated out more frequently because of the heat, as air temperatures peaked in the low 90s.

At one point, Cappel ordered fire trucks to sound their horns, warning crews inside the house to evacuate due to fears the roof would collapse. 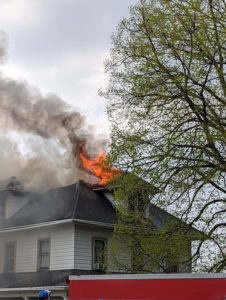 “The first priority is to get them out,” he says, “so at this point, we’re just trying to mop it up, trying to get the hotspots out.” A few people who were inside the house when the fire broke out were safely evacuated and no serious injuries were reported, though a couple of pet cats were lost.

The fire’s cause is still unknown but Cappel thought it may have been electrical in nature.