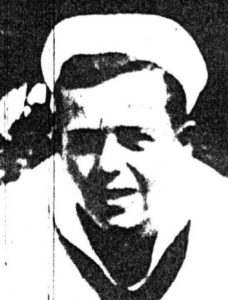 A Sioux City sailor who died aboard the U.S.S. Oklahoma during the December 7th attack on Pearl Harbor, is coming home.

The remains of storekeeper 3rd class Harry Nichols will be buried Friday a ceremony at Memorial Park Cemetery. Mark Nichols is the nephew of the sailor and he was contacted about identifying his uncle’s remains after he had his DNA tested by a national company

“Some relative of mine that I’d never knew existed in Delaware reached out to me and said the Navy was looking for relatives of Harry Nichols because they were trying to basically do the DNA match,” he says. “and I submitted that to them sometime in latter part I believe of 2018 and about mid 2020, the Navy contacted me and said they had found a number of bones that were identified as Harry Nichols, based on my DNA.”

The COVID pandemic prevented the Navy from holding a visit with the Nichols family until this April 1st when they got together with Nichols and his sister at her home in Tennessee. They brought a 100 page book to the family with Nichols’ history of service and an explanation of the identification process,

“That basically starts with Harry’s induction letters, all that paperwork in there all the forensics and pathology analysis that they had done and identifying Harry’s remains. The Navy has informed Harry’s parents, my grandparents. He was lost during Pearl Harbor,” Nichols says.  He says there was also a letter from Harry’s mom. “She writes a handwritten letter that was actually in this booklet that expressed her frustration with not knowing the exact outcome of Harry,” he explains.

Harry Nichols was 20 years old when he enlisted in January of 1941 and had turned 21 when he died 11 months later at Pearl Harbor. Mark says his dad went through North Africa into Italy and fought in nine major campaigns and did say that there wasn’t a day that didn’t go by that he didn’t think of his brother. Mark intends to do something very special at Friday’s ceremonies. “And I’m actually bringing my dad’s ashes with me and having him buried with his brother and his parents,”Nichols says.

Project Oklahoma started in 2015 to identify 388 service members who were unaccounted for after the ship was hit at Pearl Harbor . There have now been 355 individuals identified using DNA reference samples from U.S.S. Oklahoma families as well as many medical and dental records from the Oklahoma service members.