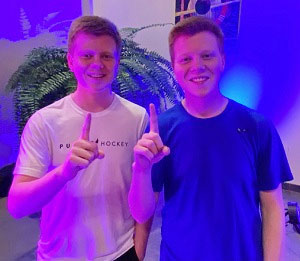 Twin brothers Alex and Derek Koops of Sioux Center along with a teammate from Massachusetts are the winners of FOX’s television show Domino Masters.

The season finale last night featured three teams competing for the championship and a $100,000 cash prize. Since the season was recorded last summer, they had to keep their win a secret or lose the prize.

“It’s been frustrating having to keep this secret for almost a year now, but it was fun to keep everyone in suspense and to be the first ‘Domino Masters’ is just amazing,” Alex Koops said.

The brothers started their domino toppling hobby when they were about ten. Producers of the FOX show discovered the pair from their YouTube channel, where the posted videos of their topples. The brothers say the competition and creating the complex builds were fun, but their favorite part of the show is what everyone wants to see

“Topple days were definitely the funnest part. Being able not only to cheer on your own build, but cheer on every other team’s build — it was just really exciting,” Alex says. “…It was really fun to meet new people and make new friends.”

Dordt University held a watch party for the twins last night as the show’s finale aired. About 300 people were there the moment the twins were declared the victors and the crowd erupted in cheers.

Jeff and Christine Koops, the twins’ parents, thought they would eventually grow out of the phase, but when the brothers started moving furniture to make room for the creations, they realized the boys were serious about their craft.

“I don’t remember how long they had been doing it, but I was having a garage sale and we were getting all set up and I’m like: O.K., I’m just selling everything in the living room. Let’s forget this. I’m tired of tripping over everything, ” Christine Koops says. “so I sold everything.”

As for what’s next for the twins, they’re not sure. The experience has certainly caused them to think more about the future.

“We’ll just see where this show takes us. Hopefully we can get a decent amount of exposure. I know we’re going to be doing some other local events,
like we’re going to be a program at the local library at the end of May,” Alex said. “There might be some other local libraries we might do programs at, but hopefully this gives us some exposure both for our YouTube channel and maybe for more professional projects in the future.”

Alex and Derek said their contract with FOX included the possibility of a future competition of champions if the program continues.