You are here: Home / News / A haboob, a dust storm black out, hits northwest Iowa 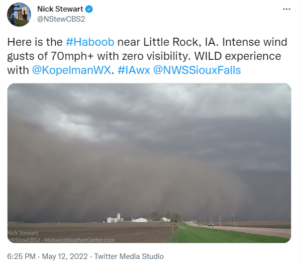 An intense dust storm called a haboob hit northwest Iowa in the Little Rock area late yesterday, causing a temporary black out due to the amount of dust in the air.

According to the Arizona Republic, the word to describe this weather phenomenon was first used in the United States in 1972.

“It is pronounced huh-BOOB,” Meteorologist Allan Curtis of the National Weather Service office in Johnston told Radio Iowa this morning.

Fifty years ago, Arizona scientists began using the word to describe the dust storms that swept through the Phoenix area. The National Weather Service uses the term, but Curtis said most Iowans probably haven’t heard it because haboobs are most common in dry, arid regions in the southwest U.S. and western plains.

“Areas where typically in large parts of the year they’re very dry, but they can also get very strong storms that can produce extreme winds,” Curtis says. “…It’s quite rare to get it into what you would call the Corn Belt region just because we’re generally not that dry and even when we are dry, we have corn in the ground, soybeans and whatnot and so there’s less opportunity to kick up that much dust.”

In the 1930s, the “Dust Bowl” did extreme damage to parts of the Great Plains as clouds of dust swept through the countryside. Curtis says it’s hard to tell with 100 percent certainty if those storms were haboobs, but it’s likely many were.

“Given all the stories that we know that have been told from the Dust Bowl and what we are able to glean from that, it was clearly an extremely dry decade, not a lot of things growing, so there was going to be ample opportunity for dry dirt, dust, other types of debris to be picked up and carried around,” Curtis says.

A combination of conditions in northwest Iowa yesterday — a strong thunderstorm with high winds approaching dry, barren cropland — produced the atmosphere for a haboob. Nick Stewart, a meteorologist for KGAN in Cedar Rapids, captured last night’s haboob on camera and posted video to Twitter.