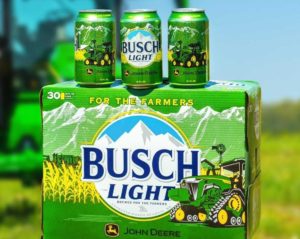 If you see green cans of Busch Light for sale, it’s part of a fundraiser sponsored by John Deere and Anheuser-Busch for Farm Rescue. It’s an organization that plants and harvests crops for farmers who’ve had a major illness, injury or natural disaster.

Matt Blaylock, a manager at Deere for fundraising events like this, says the limited edition beer cans feature a Deere tractor – the 8RX model with tracks instead of wheels.

Deere has supported Farm Rescue since it was founded in 2005. Blaylock says the group has helped more than 850 farm families in need in the past 16 years.

“When you’ve got planting to be done or harvesting to be done and in a lot of farm families there’s a main person and if they have an illness or something goes wrong you only have a small window to go ahead and get a crop in the ground,” Blaylock says.

Several retired Deere employees from the Quad Cities are now helping Farm Rescue plant crops for farmers in North Dakota and western Iowa. Deere and Anheuser-Busch will each donate one dollar for each case of Busch Light sold, up to a total of 200,000 dollars.