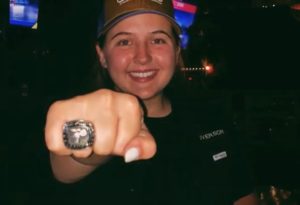 Marissa Ouverson grew up in Kansas City, Missouri, where barbequing meat is something of an art form. During the pandemic, she decided to try her own skills at the grill, going on the road for six months and entering 54 competitions.

“I got four first place, I had 26 or 24 Top 10s, and I finished 12th in the world in the points chase, and then I had the 2022 Worlds and I won the whole thing!” Ouverson says. “So, I was the youngest to ever win it and then I was also the first female. Knowing that I made history in multiple ways is awesome.”

When she was younger, Ouverson accompanied her father and older brother as they traveled to barbeque competitions, so she was a natural. Ouverson says her mother took time off from her flight attendant job to accompany her to steak grilling competitions across the country, all the while staying current with her ISU studies.

“Her and I pretty much just packed up the car and we were on the road for six months,” Ouverson says. “It was because I was able to do everything online. I had her and my dad to really take me around everywhere and go with me so that I wasn’t alone the whole time. I got so close to my family. We have always been super close, but I mean, we got to do everything together.”

Her victory at the world competition in Texas led to sponsorships, prize money, and even her own online cooking class.

“Here we are now and I haul a giant trailer around everywhere now,” she says. “What it turned into was wild. It’s mind blowing.”

As she preps for graduation, Ourverson is focusing on the next stage of her life, using her degree to help people struggling with mental health.

“I wanted to do psychology,” she says. “I wanted to help people and so I am focusing on suicide counseling, specifically for teens, and then I might end up actually going over to veterans.”

While the competition circuit may be on the back burner, Ouverson says she wants to continue improving her grilling craft — even though she’s already tops in the world and has a trophy and a ring to prove it.