You are here: Home / News / Sculptures of prehistoric beasts on display in Sioux City 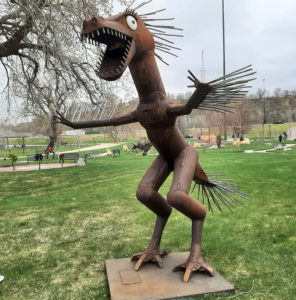 A group of “Scraposaurs” has been posted outside Sioux City’s Lewis and Clark Center. Dale Lewis — a sculptor who works with scrap metal — created the traveling display of 14 prehistoric creatures, including a sculpture that looks like one of the most famous of all dinosaurs.

“I titled him ‘T-Tex Evolved’ because he kind of looks like he’s mechanically evolved,” Lewis says. “One of the coolest things I think about this T-Rex — there’s a lot going on there, a lot of pieces — but his little stubby arm claws are kind of a mass of stainless steel, interesting hooks. They’re part of a 747 cargo bay door latch.”

Lewis finds the raw materials for his sculptures from a variety of sources and most of the beasts he built for the outdoor exhibit in Sioux City came together in two to three months.

“Eight months is the most involved piece I’ve ever done,” Lewis says. “It’s getting where pretty much everything I do is involved enough that it’s a bit of a celebration when I finish it.”

The 14 sculptures Lewis created will be on display at the center in Sioux City, near the Missouri River, until April of next year. One of his sculptures has been on display for several years at the Lewis and Clark Center. It’s a pelican and it is the mascot for the center’s kids’ club.

“Percy the Pelican was a fun piece for me,” Lewis says. “It’s pretty realistic pelican, but it has a pirate hat, with a feather and a diamond on it…That was the sketch they provided me and I just ran with it.”

The sculpture was inspired by something Captain Clark wrote in 1804 about a huge flock of pelicans in an area that is present day Sioux City.

All of Lewis’ sculptures in Sioux City are named, including one called Stanley to Stegosaurus and another called Thing. Lewis has been making sculptures with salvaged materials since 2010.