You are here: Home / News / Record Iowa gas prices not expected to keep holiday travelers off the road 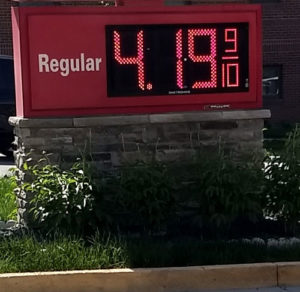 AAA says the average price of gas statewide Wednesday was $4.15 a gallon. This central Iowa station is a bit above that mark.

The statewide average cost of gasoline rose several more pennies a gallon to set another record today, but the travel forecast for Memorial Day weekend calls for it to be the busiest in years.

Meredith Mitts, spokeswoman for AAA-Iowa, says despite the high price to fill the tank, people are ready to get out of the house and down the road.
“Most folks will be traveling by car, that is always our highest number,” Mitts says. “I believe about 90% of our Memorial Day travelers plan to travel by car, which is a 4.6% increase over last year, but we also have a significant rise in air travel.”

The motor club says the statewide average for gas is now $4.15 a gallon, the highest price Iowans have ever paid to fuel up, however, it won’t foil many of our vacation plans. “We’re still going to see people traveling because there has been such a pent up demand for travel,” Mitts says. “So instead of choosing not to go, people are choosing to cut costs and other measures. That means taking a shorter-distance trip or staying at a less expensive hotel, maybe camping instead or cutting back on some of the shopping, dining and entertainment.”

Besides the high price at the pump, some Iowans are turned off by having to wear masks. While many airlines have eliminated the mask requirement, it would be wise to still pack plenty of them in your carry-on bag.
Mitts says, “That is something that everybody should double-check before they head out because the requirements are changing so often, whether it’s the airline that’s requiring a mask or it could be the airport itself.”

While Iowa’s average gas price is $4.15 a gallon, the national average is $4.56, versus the country’s most expensive gas in California at $6.05.