You are here: Home / Fires/Accidents/Disasters / Family hoping the body of Cedar Rapids man can be found 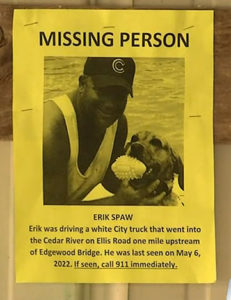 A flyer posted by the family of Erik Spaw. (KCRG TV photo)

The family of a Cedar Rapids man who has been missing since his submerged city truck was found in the Cedar River is hoping his remains can be found.

Erik Spaw was last seen on May 6th driving between work sites, and his truck was pulled from the river on May 7th. His mother Karen and other family told KCRG TV they believe complications from Erik’s Type 1 Diabetes contributed to his crash.

“He was trying to change it some way so he’d get better control of his eyesight and things. And so he was kind of doing things differently you know, and kind of trying to get it adjusted better,” she says. Family members remember Spaw as a daredevil who had loved to jet ski, snowmobile, and race cars. His brother Johnny Spaw said the numbness caused by his diabetes led to the end of his brother’s racing career.

The family has put up flyers asking for help in finding Erik’s body. Karen Spaw says the family grieves, but they also feel they are in limbo. “We’re just kind of still in shock, but we’re really hoping that they find him because it’s so hard to not know, you know, for sure that he’s deceased and we’re just waiting,” she says.

Brother Johnny Spaw has the same feeling. ”Just wish we could find him so we could get this over with. It’s not going to bring him back, but you need the old closure word everybody talks about. I don’t know. It’ll help, but it’s not going to help,” Spaw says.

Erik Spaw was 54-years old and worked for the Cedar Rapids Water Division.