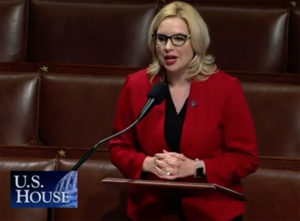 Iowa Congresswoman Ashley Hinson, a Republican from Marion, says the baby formula shortage in the U.S. is due to a lack of foresight and action by the Democrat administration.

“Back in February Abbott’s Sturgis Michigan facility closed down following a voluntary recall of baby formula. The Biden administration’s FDA should have developed a plan to prevent shortages then — but they sat on their hands for months,” Hinson says.

The baby formula is regulated by the FDA and Hinson says that’s important to keep it safe, but they need to be able to react to these types of situations. “We still haven’t seen a plan from the FDA in my mind there is no excuse for this incompetence,” Hinson says. “Last week I called for the FDA to provide a clear timeline for getting formula back on the shelves as well as a plan to prevent future shortages. This cannot happen again,” she says.

Hinson says a plan proposed by Speaker Nancy Pelosi that passed the House threw money at the problem, but didn’t provide a long-term solution. Hinson and fellow Republicans Mariannette Miller-Meeks and Randy Feenstra voted against the Pelosi bill. Democrats Congresswoman Cindy Axne voted for the measure.

Hinson says families looking for special formulas may find some relief soon. “Abbott is releasing certain types of metabolic formulas that were previously on hold. If that applies, parents should be calling Abbott the 800 number is 1-800-881-0876. And they can call that number for assistance and start the process in getting some of that formula as quickly as possible,” according to Hinson.

The president announced that he is invoking the Defense Production Act to try and help speed up the restocking of the formula.”We’ve been in direct conversations with Abbott, and before the President’s announcement yesterday we had already received word from them that they are working to not only get that plant operational but that we should be in a place where shelves are backstopped within four to eight weeks,” Hinson says. She says the president’s action does not go to the root of the problem in creating a plan for the FDA to deal with the situation.