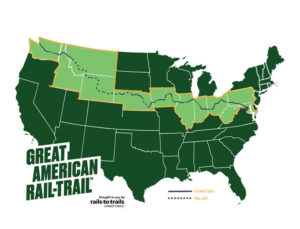 A new report details the economic benefits of a proposed pedestrian and bike trail running from Washington D.C. to Washington state, including an Iowa segment stretching from the Mississippi River to the Missouri.

Kevin Belanger, project manager of the Great American Rail-Trail, says the ambitious effort could generate a major financial boost for the communities and states it serves.

“Trails are super popular now especially during and since the pandemic,” Belanger says. “We’ve seen an incredible trail use increase and that number hasn’t come back down, so we’re seeing a lot of excitement about using trails in your local area but also doing long-distance trips as well.”

A study estimates the full trail could generate more than 229-million dollars in visitor spending every year, along with 104-million in labor income and nearly 23-million in new tax revenue. Iowa already boasts many hundreds of miles of walking and biking trails, but this proposed river-to-river route would run 465-miles through the state’s midsection, from Davenport to Council Bluffs.

“There’s already 250 completed miles on the ground in Iowa and that’s about 53% of the route complete in Iowa,” Belanger says. “Completing more of that will see the full economic benefits. We’re projecting about $14.3-million in new annual visitor spending in Iowa once this trail is completed.” The cross-country trail has the potential to bring visitors, businesses, jobs and spending to communities along its 3,700-mile route, he says, though it may be many years before it’s finished.

“We’re projecting at least a couple of decades for full completion, but new trail comes on every year so people can go out and explore the segments that are already completed,” Belanger says. “Hundreds of miles, for instance, between Pittsburgh and Washington D.C., you’ve got 350 already connected miles and we’re working on making long-distance trips possible before this is completed.”

In recent weeks, a new pedestrian and cycling trail opened on the Interstate 74 bridge connecting Bettendorf, Iowa and Moline, Illinois. It includes an observation deck and a giant glass “oculus” window at the bridge’s midpoint over the Mississippi River. That new addition would provide Great American Rail-Trail users another option for crossing the waterway.

“So right now, as you enter into Iowa from Illinois, you’re crossing at the Quad Cities there and we have mapped out on the Government or Arsenal Bridge that people can travel over,” Belanger says. “It’s an amazingly interesting bridge from a railroad perspective. So people can still cross that or if they’re looking to see the new shiny, exciting object on I-74, people can travel across that bridge, too.”