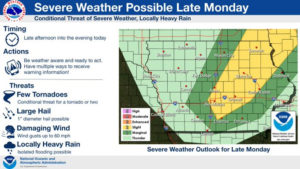 Forecasters say large sections of north-central and northeastern Iowa are likely in for rough weather late this afternoon, tonight and early tomorrow.

Meteorologist Allan Curtis, at the National Weather Service, says high temperatures may climb into the 80s and 90s statewide today, but by Saturday, highs will only be in the 50s and 60s.

“We are going to see a system come through and it’s going to bring a cold front with it,” Curtis says. “Prior to that, we are expecting a number of thunderstorms to kind of fire up in southern Minnesota and then even spread back down into the state. We’re looking at damaging winds and large hail as the main threat. A lesser threat, especially as we get down into central Iowa, would be tornadoes.”

Curtis recommends Iowans stick close to a radio or weather radio as the situation could change quickly, becoming threatening. “We’re looking at the potential for some strong winds, 60-plus miles per hour, large hail and I’m talking potentially two inches in diameter or greater could be seen in those areas,” Curtis says, “but as we work further south, it becomes a little less certain.”

While we’ve enjoyed seasonable, warm weather the past week or so, Curtis says we’re in for a change — and more rain. “Once that goes through, it’s going to be significantly cooler. I don’t want to say ‘cold’ because we are approaching the end of May, but we are going to see a couple of mornings where we could see temperatures dip down into the upper 30s,” Curtis says. “So, people may not want to put away all the coats quite yet.”

The coldest temperatures are expected Saturday night into Sunday morning, with lows predicted across Iowa in the 30s and 40s. The start of summer is almost a month away, June 21st.