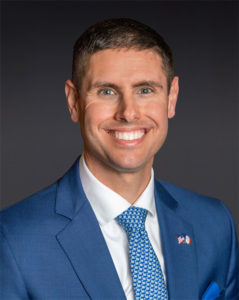 Senate Democrats have refused to confirm the four Iowans Republican Governor Kim Reynolds selected to serve on the commission that nominates people to openings on the Iowa Supreme Court and Court of Appeals.

Senator Nate Boulton, a Democrat from Des Moines who’s an attorney, said according to state law, political affiliation isn’t to be considered, but all of the governor’s nominees to the commission have been either Republicans and independents.

“This is the new level of partisan politics in our state,” Boulton said. “Controlling two legislative chambers and the governor’s office is not enough. Republicans now are insisting on controlling the judicial branch and Senate Democrats cannot stand for that.”

In a written statement, Reynolds said she nominates “highly qualified commissioners” who share her judicial philosophy and she called it “shameful” for Senate Democrats to “play (these) political games.”

It takes the “yes” votes of 34 senators to confirm the governor’s nominees to the commission. Senator Brad Zaun of Urbandale is one of 32 Republicans and Zaun said he’s looking forward to the day when Democrats don’t have the power to make these decisions “and I look forward to our side being in the super majority because what’s being done with these great Iowans is disgusting.”

A super majority would be 34 senators — enough to confirm all of the governor’s picks for position in state government. The 17 member Judicial Nominating Commission has already begun the process of selecting a replacement for Justice Brent Appel, who will retire this summer. Every other justice on the court was nominating by Governor Reynolds or Republican Governor Terry Branstad.

It appears state law allows the four people Reynolds had nominating for the commission to serve for two months. That means they’d complete the process of sending Reynolds a slate of three candidates for Appel’s seat on the Iowa Supreme Court before being forced to leave the nominating commission.