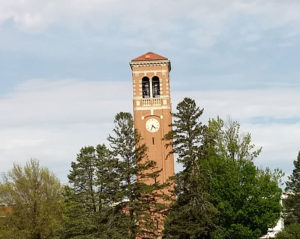 The Campanile on the UNI campus. (RI photo)

Legislators will return to the state capitol today to put the finishing touches on state spending plans for the budgeting year that begins July 1. Republicans who hold majorities in the House and Senate have agreed to provide Iowa’s 15 area community colleges with $6.5 million more for the next academic year.

The three state universities will get a five-and-a-half million dollar boost, “which brings them up to $575 million in this budget,” said Republican Senator Chris Cournoyer of LeClaire, who that’s “not a trivial amount.”

Democrats like Representative Cindy Winckler of Davenport say tuition at the University of Iowa, Iowa State University and the University of Northern Iowa will have to go up, as state support of the universities today is less than it was in 2009. “It is unfortunate that we have such a backward view of our role in funding education in this state,” Winckler said.

Senator Herman Quirmbach, a Democrat from Ames, said the state universities are being starved. “To continue to bleed resources out of these universities is going to cause long term damage to this state,” Quirmbach said, “long beyond any of us in our tenure here in the Senate.”

Representative David Kerr, a Republican from Morning Sun, said he fought with Senators to get as much as he could for scholarships for students planning to be teachers or mental health professionals, but wasn’t able to get as much as he had hoped in his final year as a legislator. “What do I know? I’m just going to go home, turn the TV on and say: ‘What they heck did they do again?'” Kerr said. “…Why can’t certain things be done together?”