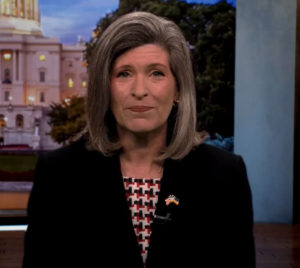 Iowa Senator Joni Ernst, a Republican from Red Oak, says her outspoken stance against the Russian invasion of Ukraine is probably the reason she’s been banned from Russia.

“To be put on a banned list by Vladimir Putin and Russia who you know Vladimir Putin is an autocratic murderous thug, being on that list that actually tells me that I’m doing something right,” Ernst says.

Ernst says the Russian ban won’t have an impact on her stance. “I will continue to be outspoken against Vladimir Putin — again he is an autocratic murderous thug — and what he has done is absolutely abhorrent and the civilized world should not stand for it,” according to Ernst.

All four members of Iowa’s House delegation were sanctioned by Russia in mid-April.