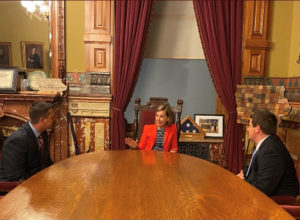 GOP backers say a new plan unveiled on the final day of the 2022 legislative session gives parents who’re unhappy with their local public school the option of immediately transferring their child to any other public school in the state.

“I think it shows that the legislature stands with parents and students,” House Speaker Pat Grassley, a Republican from New Hartford, told reporters early this morning after the House adjourned for the year at 12:16 a.m.

Senate Majority Leader Jack Whitver, a Republican from Ankeny, said this plan was drafted after the governor’s proposal for state scholarships for private school expenses faltered in the House.

“Obviously with the other school choice pieces not passing this year, we thought that was a logical step to continue to allow parents to have as much choice as possible while staying within the public school system,” Whitver said during a news conference in his office after the Senate adjourned at 12:10 a.m.

Grassley said the open enrollment proposal isn’t “targeted” at any specific district, but was inspired by frustrated parents. Governor Reynolds met earlier this month with parents of Linn-Mar students who’re upset about the district’s policy for transgender students. The Linn-Mar policy was approved after the March 1 open enrollment application deadline for transfers to another public school district.

“We think that parents need to have that opportunity that if they want to send their child to another educational institution, that they should have that,” Grassley told reporters.

Under current law, open enrollment requests must involve transferring a student from the public school district where they live to a school in an adjacent district and applications are due March 1. However, Emily Piper, a lobbyist for the Iowa Association of School Boards, aid parents have been able to get their child immediately transferred to a school in a neighboring district under certain circumstances. “For instance, bullying and harassment, a divorce or custody changes…failure to help the student achieve,” Piper told Radio Iowa. “Those things are fairly black and white as far as what the exemptions are from the current March 1.”

That March deadline for most student transfer requests gave schools time to adjust staffing levels, since the yearly allotment of state spending for a student shifts to their new district under open enrollment rules. Piper indicated schools are prepared to make mid-year calculations on budgeting for students who are transferring immediately, though, since mid-year transfers have been happening under special circumstances.

The plan that cleared the legislature in its closing hours does not change some parts of the open enrollment process, so districts will be able to decline a transfer request if they don’t have classroom space or staff to serve a student who requires special education services. “The home district still has to approve the request. They did not change that,” Piper told Radio Iowa. “The receiving district still has to accept the student and they did not change that.”

The proposal is included in a wide-ranging bill Republicans in the House and Senate approved late Tuesday night.