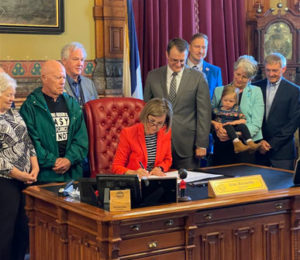 The governor has signed a bill into law that requires testing for radon gas in public school buildings.

The legislation is named in honor of Gail Orcutt, a retired teacher from Pleasant Hill who died of radon-inducted lung cancer in 2020. She had lobbied for the bill for a decade. Senator Jackie Smith of Sioux City is among the lawmakers who paid tribute to Orcutt before voting “yes” on the bill.

“This is a bill about the lungs,” Smith says, “but it was pushed by the heart.”

The new law lets school districts use local option sales taxes to install radon mitigation systems. Testing to screen school buildings must be completed by July 1st of 2027. Senator Joe Bolkcom of Iowa City voted for the bill, but raised concerns about that deadline.

“Do you think it makes sense to wait five more years to have a radon test in a building that might have a radon problem and kids being exposed to radon gas for the next five years?” Bolkcom asked.

Senator Craig Johnson of Independence said it’s his understanding many schools have already been tested for radon, but this will spur others to do so. “My wife works in a public school,” Johnson says. “Believe me, I want this to get started as soon as possible myself.”

Officials estimate about 400 Iowans will die of radon-inducted lung cancer this year. Radon is an odorless gas that seeps into homes and buildings through cracks in the foundation and every Iowa county is considered to have high levels of radon in the soil. In addition to testing of existing school buildings, the new law requires radon control systems to be part of any new school construction projects.

“This will save lives,” said Representative Art Staed, a retired teacher from Cedar Rapids. “It’ll save students’ lives and it’ll save teachers’ lives.”

The bill passed with the support of all but two members of the legislature. The governor held a private bill signing ceremony on Tuesday for advocates who’d pressed for passage of the legislation.