You are here: Home / News / Iowa lake and river levels vary quite a bit from east to west 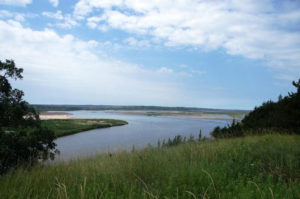 Boaters on both sides of Iowa need to use caution during the upcoming holiday weekend, but for different reasons. Water levels are expected to rise more than a foot on the Mississippi River due to snowmelt and rains to the north.

Some of the trouble areas in the west include Carter Lake in Pottawattamie County, which is three feet below crest. The water level at Lake Manawa has been down a few feet all spring. Elsewhere, low levels are reported on Blue Lake in Monona County, DeSoto Bend in Harrison County, Snyder Bend and Browns Lake in Woodbury County, and several others along the Interstate 29 corridor.

“Boaters headed out this Memorial Day weekend will see abnormally low conditions in those lakes,” Hayes says. “It’s going to impact access through the boat ramps to these water bodies as well as present hazards while out boating, so we just really urge caution.” The watershed of the Missouri River extends all the way to Montana, with several flood control reservoirs in South Dakota.

“The Corps of Engineers has increased the releases for the navigation season on the river, so eventually we’ll start to see water come back into these systems,” Hayes says, “but the lag time, it’s just not going to happen before Memorial Day weekend and it may not happen this summer at all.”

Meanwhile, National Weather Service forecasters say the Mississippi River is rising quickly and currents are strong. That waterway is expected to crest at Davenport on Sunday around 13.5 feet, that’s about 18 inches shy of the initial flood stage.