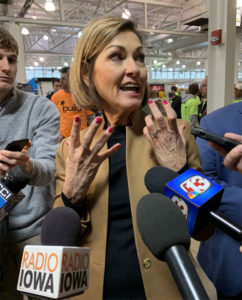 Reynolds told reporters this morning that banning semi-automatic weapons like the one used to kill two teachers and 19 students in a Texas school isn’t the answer to school shootings.

“You can’t focus on one thing and think it’s going to fix it because then the other thing that you do is you start to give some false sense of security that that’s it and we’re all going to be safe,” Reynolds said. “We all have to vigilant in our response looking for ways to keep kids safe — and people.”

Earlier this spring, Reynolds met with a company that digitizes the layout of schools, so those maps could be used by law enforcement in an active shooter situation. The state may also buy an app that lets students anonymously submit tips that a classmate may be threatening their school.

“One of the things we wanted to make sure we had in place also is you need a central location, so we have somebody there that’s actually hearing, because it’s not an 8-5,” Reynolds said. “A lot of times those things happen later at night.”

Reynolds signed a law in 2018 requiring every Iowa school to have a “high-quality” emergency plan, conduct annual reviews and practice the response to an active shooter. The Iowa Department of Homeland Security and Emergency Management also conducts threat assessments.

“I think they’ve done about 54 since 2015 with the different school dsitricts,” Reynolds said. “So what we’re looking at is maybe contract that out and provide that for all school districts.”

Those could be done over the summer, according to Reynolds.

Reynolds said there’s no single answer to what happened in Texas, but the governor said reports the shooter was in the school for an hour before law enforcement intervened were concerning.

“As we have these horrific things happen we need to do an honest assessment and we need to be forthcoming about what happened and what we do differently going forward,” Reynolds said, “and we talk about that and we implement that into the training.”

The Texas shooter shared his plans on social media right before heading to the school and Reynolds said she’s troubled by news he may have indicated at the age of 14 that he’d go into a school with a gun when he was a senior.

“I cannot imagine what these families — parents, grandparents, spouses, the school staff, the community, the local law enforcement to have to walk into that scene, the country, I mean, it is horrific,” Reynolds told reporters. “…You can do everything you can and continue to evaluate and be as prepared as you can to make sure that things like this doesn’t happen, but there is evil that exists in the world and if you’re determined to do something like this, you’re probably going to find the means to do it, but let’s be proactive.”

The Governor’s School Safety Bureau is submitting applications for federal grants and Reynolds said the recently-formed bureau is coordinating state agency efforts to plan for and respond to threats in Iowa schools.