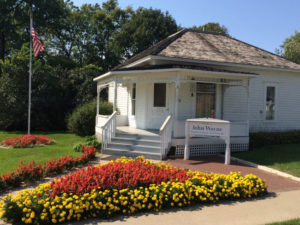 The southwest Iowa town of Winterset is hosting a celebration this weekend to mark what would have been the 115th birthday of actor and native son John Wayne.

Liz Hansen is manager of the John Wayne Birthplace and Museum. A dedication ceremony and grand opening is scheduled for Saturday morning at the museum which doubled in size with the new expansion.

“The old museum was refurbished to be movies and movie outfits from the 1930s up to the 1970s,” Hansen says. “The new museum is called Friends and Family, with an Alamo display on one end of it.” Events this weekend include a pancake breakfast, a 5-K run, a sold-out dinner and auction, two free showings of the movie “McLintock!” and more.

“We will have book signing by Mark Orwoll who wrote the book, ‘John Wayne Speaks,'” Hansen says. “We will have Barry Corbin here, who is a cowboy character actor, great guy.” As it’s also a holiday weekend, Hansen is expecting large crowds in little Winterset, especially following two years of postponements due to the pandemic.

“It’s like a reunion every year. We have people actually scheduled from two years ago,” Hansen says. “They book up all the bed-and-breakfasts and the two motels that we have. It’s quite a busy time and it’s more fun than you can shake a stick at.” 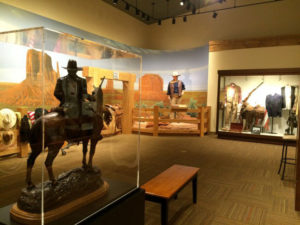 Born in Winterset in 1907 as Marion Morrison, Wayne started acting during the silent film era of the 1920s and later became a popular icon through his starring roles, especially in westerns and war movies. He was among the top box office actors for three decades, appearing in 142 films and being named by the American Film Institute as one of the greatest-ever male stars.

While he died in 1979, Hansen says “The Duke” remains much beloved to countless fans. “That’s true!” Hansen says, laughing. “I mean, they still love the past presidents and I think he’s right up there with them.” Wayne’s birthday was Thursday.