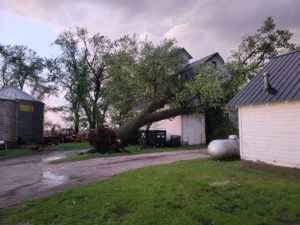 Storm damage is scattered from one end of Iowa to the other after severe weather rolled through late Monday night and early this morning.

National Weather Service meteorologist Alex Krull says at least a dozen counties are reporting damage to trees, roofs and farm outbuildings, with some of the worst of it being found in Hamilton County.

“We had some strong winds, anywhere between 60 and 70 miles per hour, that resulted in some downed power lines as well as grain bin damage,” Krull says. “We’re also looking at the potential for other tree damage that may have occurred in the county. We had some isolated reports of hail up to about quarter size with some of the initial storms that went up in northern Iowa.”

While it is tornado season in Iowa, Krull says it appears all of the damage from this storm was caused by straight-line winds. 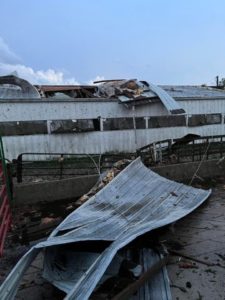 Livestock barn at the Jerry Klaver farm near Kamrar

“We’ve not had any reports of tornadoes or suspect any of the damage was caused by a tornado, therefore we do not anticipate doing any surveys,” Krull says. “We will be calling emergency managers and other core partners to get more damage reports. If we do suspect that there is anything that may have been tornadic, then that would require sending crews out.”

Hamilton County Sheriff Doug Timmons says it was a rough night and clean-up is well underway.

“We had a lot of tree damage, some structural damage to machine sheds, a little bit of roof damage to residential, some grain bins destroyed, a lot of power lines laying on the roads and power poles knocked over,” Timmons says, “but the biggest thing is that we’ve had no injuries reported.”

While some Iowa cities had high temperatures Monday in the 80s and low 90s, cooler weather is coming behind the storms that should mean highs by Wednesday only in the 60s and 70s.