You are here: Home / Sports / Iowa’s Kris Murray to return for junior season 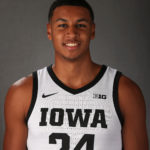 Iowa’s Kris Murray is returning for his junior season after withdrawing from the NBA Draft.

“These past two months have been a tremendous learning process for me,” said Murray. “By going through the NBA Draft process, I believe that it will help me in the long run and this upcoming season at Iowa. I can’t wait to get back to work with my teammates and coaches to play for the best fan base in the world. Go Hawks!”

Murray (6-foot-8, 211 pounds) posted single season bests in every statistical category last season. He improved his scoring average by +9.1 points per game and rebounding average by 3.7 per outing.

Murray was Iowa’s leading scorer (9.7 ppg) and rebounder (4.3 rpg) off the bench, which ranked fourth and third overall, respectively. His 31 blocks and 43 3-point field goals rank seventh and eighth most, respectively, by a Hawkeye sophomore. He ranked second on the squad in 3-point accuracy (.387, 43-of-11), blocked shots per game (0.9) and field goals made (124), third in offensive (1.6) and defensive (2.7) rebounds, and fourth in steals (0.8). He made at least one 3-pointer in a team-best 17 consecutive games (Jan. 22-March 13) and recorded multiple steals in 10 games and multiple blocks in nine contests.

“Everyone in our program is very excited to have Kris back,” said Iowa head coach Fran McCaffery. “We are happy that Kris had a positive experience going through the NBA process. He gained valuable feedback through workouts and conversations with NBA personnel. Kris will be awesome next year.”