You are here: Home / News / Hanusa and Halbur on Iowa GOP’s Primary ballot for auditor 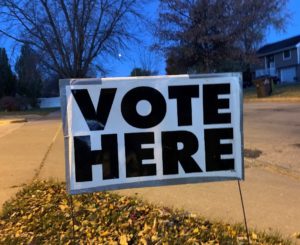 Two Republicans are listed on this year’s Primary ballot for state auditor and the winner will face Rob Sand, the Democratic incumbent, in the General Election.

Mary Ann Hanusa, who has been endorsed by Governor Reynolds, managed the White House Office of Correspondence for President George W. Bush. She was more recently elected to five terms in the Iowa House, representing her hometown of Council Bluffs for 10 years.

“I served as Government Oversight chair in the House when I was in the legislature,” Hanusa said during a Radio Iowa interview, “I brought in front of the committee heads of state agencies, asking tough questions, making sure the Iowa taxpayers’ dollars were being spent appropriately.”

Hanusa said Sand, the current state auditor, was wrong to question Governor Reynolds’ appearance in a taxpayer-funded, public service announcement outlining steps that could stop the spread of COVID-19.

“I believe that for the last four years our state auditor’s office has been politicized,” Hanusa said, “and there just isn’t any room for politics in this office.”

Todd Halburof Clive is the other GOP candidate for state auditor. Halbur sued the state in 2018, alleging he was fired from his job as chief financial officer the Iowa Alcoholic Beverages Division after he questioned some transactions. A spokesperson for the agency has said Halbur’s allegations are untrue.

Halbur said if he’s elected state auditor, he’ll educate state employees on how to spot waste, fraud and abuse. “The eyes and ears of all employees know what’s right and wrong,” he said during a KMA interview.

Halbur, who is a realtor, also owns a school supply business. He’s previously worked for three different banks and is taking the test to become a certified audit examiner.

“I believe that Iowa needs an auditor that has the financial background and the qualifications that I have as a prior banker and the CFO of a large state agency of Iowa,” he said.

Sand, the Democrat who is Iowa’s current state auditor, is seeking a second term. The Democratic and Republican Primary Elections are next Tuesday, June 7.