You are here: Home / Crime / Courts / Victims identified in shooting outside Ames church 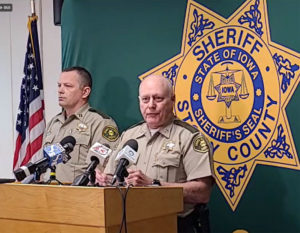 Story County Sheriff Paul Fitzgerald says the murder and suicide outside a church on the east side of Ames Thursday was a targeted domestic situation.

Fitzgerald, in a news conference this morning, says 33-year-old Johnathan Lee Witlatch of Boone shot and killed 22-year-old Eden Montag and 21-year-old Vivian Flores outside the Cornerstone Church with a nine-millimeter handgun.

“Whitlatch fired several rounds, and within a matter of seconds Eden Montag and Vivian Flores were fatally injured from the gunfire,” he says. The sheriff says a third woman escaped and then Whitlach shot himself. The two women were ISU students, on their way to a bible study.

Fitzgerald says Whitlach and Montag had recently broken up a relationship. “On May 31st, 2022, Whitlatch, was charged by the Ames Police Department and ultimately arrested in Boone County for harassment third-degree and impersonating a public official. Both of these charges were directly related to Eden” Fitzgerald says. “Whitlatch posted bond on these charges and was scheduled to have an initial appearance on June 10th.”

Fitzgerald did not yet know the hometowns of the two women who were killed. He says they are also trying to determine if Whitlach followed them to the church. “Right now, there are certain points that we’re going to have find out through the investigation as we’re doing this. What we know is the three women were in the parking lot going to go into the church, the suspect pulled up in his pickup and got out. And then the chaos began,” according to Fitzgerald.

Fitzgerald says Whitlach was focused on Montag and didn’t have any intention of shooting others in the church. “He went right into action when he got there from all indications — I think that’s pretty evident that he was there for that purpose,” Fitzgerald says.

The sheriff believes there was a no-contact order against Whitlach. Fitzgerald says they will dig deeper into what may’ve led to the shooting.

“We’ll be looking into social media on Facebook. We’ll be doing interviews with others at the church, people who know them, that man knew what kind of relationship they had and what happened in that aspect. There’s a whole host of things that we need to still complete in order to bring a full understanding as to what happened and why,” he says.

Fitzgerald says deputies arrived four minutes after the 9-11 calls about the shooting and everything was already over. He says there were some 80 people in the church at the time, and it could have been worse had Whitlach entered the church.