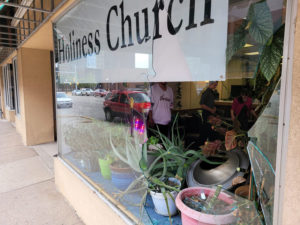 A man is in custody, accused of shattering the window of a downtown Sioux City church during Sunday’s church service. Pastor Aaron Iacino was delivering the sermon at the Holiness Church when it happened at about 10:45.

“That dude just broke it with a skateboard, maybe threw a rock,” Iacino said seconds after it happened.

It turned out to be the metal lid from the trash cans the City of Sioux City has placed in the downtown area. Iacino says the congregation was startled, but no one was
injured.

“That front window was huge and obviously everyone was really jolted,” he says, “but I saw it looked like a vandalism thing and not an attack, so I knew we were safe.”

“There were already called because this person had already caused some problems at some other businesses,” Iacino says. “Now we’re dealing with the police reports and insurance claims and we’ve got the window boarded up and hopefully we’ll get it replaced soon and keep doing what we’re doing.”