Republican Chuck Grassley is seeking an 8th term in the U.S. Senate.

“I like serving the people of Iowa,” Grassley said. “I try to work as hard as I can to represent them.” Grassley said during an event Saturday.

Grassley and Governor Kim Reynolds addressed a crowd at her campaign headquarters in West Des Moines.

Grassley would be the senator with the longest tenure in January. Jim Carlin, a state senator from Sioux City, is running against Grassley in the Republican Primary. “I feel that the base of people that are going to align themselves with us is very energized,” Carlin said during an interview with KSCJ Radio. 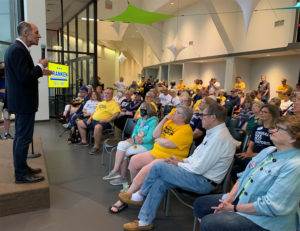 Three candidates are running in the Democratic Party’s U.S. Senate Primary. Democrat Mike Franken held a get out the vote rally in Des Moines Sunday evening. Franken, a retired Navy admiral, said if he’s elected Senator, rebuilding the Iowa Democratic Party will be part of his mission.

“A new level of progressive thought, liberal thought — like Iowa used to be,” Franken said. “… We were the generator of good ideas.”

Franken reviewed what he considers faults in Grassley’s voting record and told the crowd he’s prepared to respond to Republican campaign tactics.

“We’re on the right side of this. Stand up. Be kind. Be quick with the response and don’t let it go,” Franken said. “We’ll win this.” 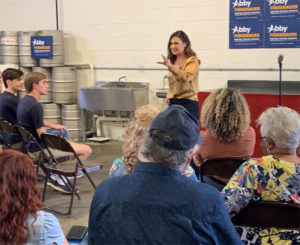 Democrat Abby Finkenauer, a former Iowa congresswoman, spoke to supporters Sunday afternoon in West Des Moines. “We need you to vote, vote, vote Tuesday. If you haven’t already, go on Tuesday, bring your friends, bring your neighbors, bring everybody,” Finkenauer said, “and then we also need you in that General.”

Finkenauer told the crowd she got more votes in her congressional district than Democrats who were running for governor and U.S. Senate in 2018 and 2020.

“Every single time I’ve been on that ballot, again, I have overperformed the Democrat above us who has had more money,” Finkenauer said. “We have brought together coalitions that, honestly, some Democrats that have ran for federal office have struggled to do.”

Glenn Hurst, a physician from Minden, campaigned at the Arts Festival in Iowa City on Sunday. Hurst plans to watch Primary Election returns at home with his family on Tuesday night. Finkenaur will host supporters at an event tomorrow night in Cedar Rapids. Franken is holding a Primary Election Night event in Des Moines.