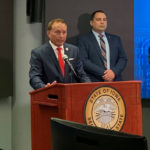 Iowa’s commissioner of elections says early voting in this year’s Primary Election will set a record in a non-presidential year. Secretary of State Paul Pate said more than 73,000 Iowans voted by absentee ballot.

“Redistricting and a lot of districts getting merged now and new faces and then of course we have a U.S. Senate race on the Republican and Democratic sides and a big primary here in the Polk area for a congressional race — I think you put all that together and it’s going to put some people out there to make sure their voice gets heard,” Pate said.

In-person voting for the primary was “steady,” but not “overwhelming,” according to Pate, meaning total participation in the 2022 Primary will not set a record.

Pate has ordered all 99 counties to conduct a post-election audit of the primary election. Wednesday, there will be a random drawing to select one precinct in each county to be a audited. Pate said that will trigger a hand count of the paper ballots in each of those precincts.

“Compare them to what the tabulator said the results were and if there happen to be any discrepancy those will have to be resolved to determine what the issue might have been and also to determine if we need to take further action,” Pate said. “When we’ve done these post-election audits of General Elections in the fall, every one of them we’ve done has been 100% match, so I’m optimistic we’ll see the same again.”

A host of other races have been settled for the General Election ballot.  Republican Governor Kim Reynolds and Democrat Deidre DeJear were unopposed in their gubernatorial primaries.

There was a far closer contest between Republicans vying to run against Democratic State Auditor Rob Sand in November. Realtor Todd Halbur finished about 2.5% ahead of former state legislator Mary Ann Hanusa. Governor Reynolds had endorsed Hanusa in January.