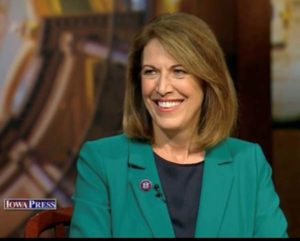 The new third congressional district includes Des Moines and covers 21 counties. It has been considered one of the GOP’s pick-up opportunities as Republicans campaign to gain majority control of the U.S. House.

“It’s been the most watched race since early last year, so I’m going to keep approaching it the way I have been approaching it, which is to just bring home the goods for the State of Iowa,” Axne told Radio Iowa, “and do a great job on the official side and also get out and meet all the folks.”

The new district covers nine counties not included in the area Axne currently represents. Axne said in-person campaigning has been and will be critical “and make sure everybody out there knows the trust, differentiate myself from the narrative that they’ll see on TV and make it really local. That’s how I’ve won in the past.”

Axne was first elected in 2018, defeating Republican Congressman David Young and she won a 2020 rematch with Young. The 2022 election is shaping up as a referendum on President Biden. Axne said she intends to defend the administration’s record on the pandemic and a host of other issues.

“I will not let anybody just smack down, no matter who it is, with wrong information,” Axne said. “…He came to Iowa to announce to our farmers and our rural communities massive growth through E15 year-round.”

Nunn said on Primary Night that people in Iowa and across the country are “ready for change” from Democratic control of congress and the White House.

Axne was unopposed in Tuesday’s Primary. Axne points out she received 1400 more votes than the three Republicans who were competing for the chance to run against her in the General Election.