You are here: Home / News / Franken picked by Democrats to challenge Senator Grassley in November 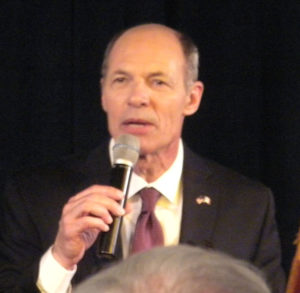 “We must defeat Chuck Grassley,” Franken said, pausing as his supporters cheered, then adding: “so for too long, he has said: ‘We’re working on that…There’s a committee addressing on that,’ from the NRA, from a host of other things.”

Franken, a northwest Iowa native, had a 36 year career in the Navy, including a stint in leadership at the Pentagon.

“My promise to you is that I will reinforce every day a basic precept that I learned (over) many, many years in the military,” Franken said, “and that is caring for those you’ve never met as much as those
you know.”

Franken got 55% of the vote in Tuesday’s Primary. He spoke to supporters in Des Moines after the race was called.

“My promise to you is that I will support Social Security for all of us, make sure it’s vibrant. I will give Medicare to all those who want it,” Franken says. “My job is to make education, the type that I received, available to everybody in the state and renew the basic Iowa precept where we came to this state and we graduated from this state better than anyone else in the nation.”

Finkenauer finished with 40% of the vote. Finkenauer told supporters in Cedar Rapids last night that she had called Franken to congratulate him.

“And for winning tonight in a way that I know is going to bring together Iowans to do what needs to get done in 2022, which is defeating Senator Chuck Grassley,” Finkenauer said, to cheers at an event in Cedar Rapids.

Finkenauer served one term in the U.S. House, but lost her bid for reelection in 2020. Finkenauer told supporters she’ll “never stop fighting” for Iowa.

“We are going to do everything we can for these Iowa Democrats in 2022 because our state and our democracy depends on it,” she said at the conclusion of her  speech..

Glenn Hurst, the third candidate in the race, finished with about five percent of the vote and he has offered his “full support” to Franken’s bid to defeat Grassley.

Grassley, who is seeking an 8th term, cruised to victory in his G-O-P contest against Sioux City attorney Jim Carlin. “Quite a victory,” Grassley said. “I love serving the people of Iowa.”

Grassley’s ca,[aogm released two prepared statements last night after his victory — one was a video.

“Thank you to all of you who supported my renomination so we could to turn around the bad policies of this administration,” Grassley said.

In an audio recording released by the Grassley campaign, the 88-year-old senator celebrated his victory, but he also asked Republicans to unite behind the party’s General Election ticket.

“Now that the primary’s over, I want everybody to unite so we can have a big victory in November. A big victory in Iowa contributes to Republicans taking over control of the United States Senate and House of Representatives.” Grassley is suggesting the 2022 election will be a referendum on President Biden.

“Just think of what I hear at my 99 county meetings – the Q&As with my constituents – they’re upset about inflation, gasoline prices, the border crisis,” Grassley said. “…So, we work hard between now and November the 8th and by doing that, we will save America from the bad policies of the socialistic endeavors of the progressive left.”

Grassley won his primary with 73.5% of the vote compared to Carlin’s 26.5%. It was the first time Grassley had faced a primary since 1980 — the year he was first elected to the U.S. Senate.