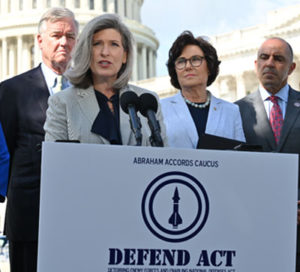 Iowa Senator Joni Ernst is leading a bipartisan group of lawmakers calling for a new Middle East agreement, to counter Iran. Ernst said Wednesday’s drone attack on a U.S. consulate in the Kurdish area of Iraq shows Iran and its proxies are a growing threat in the region.

“Iran is presenting a clear and present danger to the United States and Iraq,” Ernst said.

Ernst envisions a security cooperation agreement among the U.S., Iraq, Israel, the United Arab Emirates as well as other Arab nations. She said it would set the stage for integrating air and missile defense systems in those countries.

“The point is we’re trying to pull everybody together to get systems that will actually work together,” Ernst said.

Ernst has introduced a bill that outlines these ideas. She said it’s not about creating something like NATO, where partner nations pledge to provide military support to a member that’s attacked or invaded. Instead, The goal, she said, is to ensure defense systems in Middle East countries that are U.S. allies can effectively communicate and respond to missile attacks in the region.

“It doesn’t require that the United States provide defense. It’s just security cooperation,” Ernst said. “…We feel if we are able to get them speaking
together about security cooperation, then other things will follow…We end up seeing them engage culturally, we’ll see them engage in trade, so there’s a lot more that will follow after these countries know that they’re working together for collective national security.”

Democratic senators from New Jersey and Nevada and a Republican senator from Oklahoma joined Ernst today in co-sponsoring the bill and speaking at a news conference in Washington, D.C.