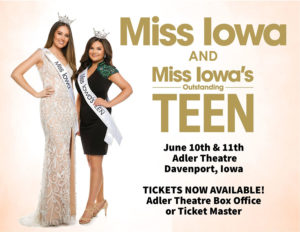 A young woman from Iowa who will compete in this year’s Miss America Pageant will be crowned this weekend in Davenport.

Rachael Vopatek, president of the Miss Iowa Scholarship Program, says there are 30 candidates who will be taking part in a combined program, 14 in the Miss Outstanding Teen contest and 16 who hope to become the next Miss Iowa.

“Competition begins today with the private interviews,” Vopatek says. “They’ll be meeting with the judges one-on-one and each candidate gets that private time to answer questions and let the judges get to know them, and that becomes one of our preliminary scores.” The contestants will be competing in categories including: onstage interview, a Red Carpet event, and talent.

“We have everything from vocal performances, musical theater, we have violin, we have piano,” Vopatek says. “We have several different types of dancing, we have ballet on point, we have lyrical ballets, and we do have some dramatic monologues, too.” Another important element is what’s known as the Social Impact Pitch, what used to be called the platform.

“Basically, it’s a cause that each candidate feels passionately about,” Vopatek says. “So they choose their own social impact initiative and even leading up to this competition, it’s something that they’ve been working on on their own time. We’ve got things from urban farming to education and literacy, it’s just all across the board.”

Some three-dozen colleges are offering scholarships, while the new Miss Iowa will claim a prize package that also includes a car, a fur coat and more. The competition is underway at the Adler Theatre in Davenport and the winners will be crowned on Saturday night. The teen winner will go on to the national contest in Dallas in August, while the new Miss Iowa will compete for Miss America in December in Connecticut