You are here: Home / Fires/Accidents/Disasters / Fawning season has deer more active along roadways 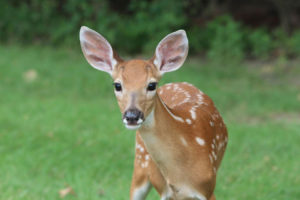 Iowa drivers know they need to be watchful for deer at all times of the year, but it’s especially important to be vigilant over the next few weeks.

Mick Klemesrud, spokesman for the Iowa Department of Natural Resources, says it’s fawning season and that means deer will be more plentiful along our roadways. “The fawning season is the second-highest deer/car collision time because for the last year, these yearling fawns have been under the watchful eye of the doe,” Klemesrud says. “As she gets ready to drop this year’s crop of new fawns, she’s going to get rid of the last year ones, so suddenly, they’re on their own and they’re trying to figure things out.”

“The doe has put the fawn there for a reason. She’s going to go off and do her thing. She’s going to feed and come back and take care of that young deer,” Klemesrud says. “If you come across it, it’s not lost, it’s not abandoned, she knows exactly where it is, and there’s a good chance she’s probably going to be sitting somewhere near keeping an eye on it, so don’t try to rescue it.”

Iowans who might spot a hidden fawn are warned to leave it alone as it has built-in camouflage. “That’s one of their defense mechanisms is their spots on their back,” Klemesrud says. “They’ll blend in with the forest floor and they’re born without a scent to help avoid predators, so as long as they’re not moving around, they should be just fine.”

The DNR is not taking in fawns to avoid the potential of spreading chronic wasting disease — or other diseases — to new areas. A State Farm study found Iowa is one of the top states for deer collisions. It shows Iowa drivers have a 1-in-69 chance of hitting a deer, based on insurance claims. Each year, around 7,000 crashes between vehicles and deer are reported to Iowa law enforcement.