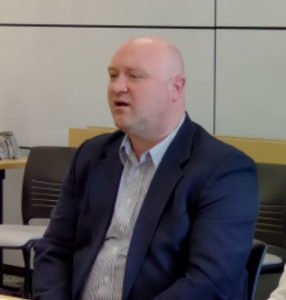 Benjamin Forsyth talks to the State Board of Ed. (screen capture from meeting)

The State Board of Education has approved plans by the University of Northern Iowa to offer an online accelerated elementary education and special education teacher program.

UNI’s Director of Education Preparation Benjamin Forsyth says courses in this program will be offered in eight-week, eight-credit terms. “The way we had to do this to be able to accelerate was to bundle courses that typically aren’t taught simultaneously,” he says.

You will need an Associate of Arts (AA) or Associate of Science Degree and must be employed as a paraeducator or teachers’ aide within a K through sixth-grade school setting to get into the program. Forsyth says surveys on the interest in such a program show it is high.

“Just one example, on Facebook, if you and I say hey we’re doing something, you got about three shares, we’re up to almost 200 shares on this,” Forsyth says. Iowa and other states have been struggling with teacher shortages, and it’s hoped this will help.

“We’re expecting a lot of people to apply, but then a portion of those not to actually meet requirements. And because chapter 79 is the way it is we really can’t take anyone that doesn’t have an AA or AS. We really can’t take a paraeducator that’s teaching preschool because they’ve got to have these field experiences,” he says.

Forsyth says they will slowly get the program rolling. “We want to take as many as we can but we’re not expecting to go that large on this first round,” Forsyth says, “we know that we don’t have the resources to go beyond about 30 or 60. We know that we’re going to have to work out some bugs on the first round but we want to see this happen.”

Those who complete the accelerated program will have a Bachelor of Arts in Elementary Education and a minor in Special Education with teaching endorsements for a K-6 elementary teacher and K-8 instructional strategist.

The State Board of Education approved the plan at their meeting on Thursday.