You are here: Home / Human Interest / Ambulances from eastern Iowa headed to Ukraine 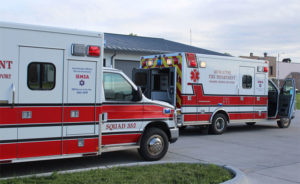 Two aging ambulances from the eastern Iowa town of Muscatine will soon be helping carry the wounded in a war zone overseas.

“OSF Healthcare out of Peoria was gathering medical supplies, including ambulances, to send over for use in Ukraine,” Jenison says. “So Gary got a hold of the people at OSF, determined that the two surplus ambulances would be a great opportunity for us to give something that is much needed.” The surplus ambulances each have more than 250,000 miles on them, so they no longer meet standards for service in the U.S.

“From what I understand, they’re losing an average of seven ambulances a day due to the Russian attack so it’s a need that needs to be filled,” Jenison says. “OSF has already done two flights. I think they sent five ambulances total so far.” Jenison says the ambulances will be taken by truck from Chicago to Philadelphia, then loaded onto a cargo plane that’s bound for Ukraine.

(Thanks to WVIK, Rock Island)