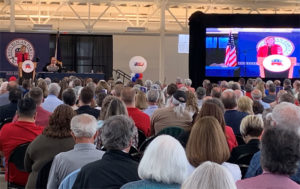 Governor Kim Reynolds is making it clear that if she’s re-elected, she’ll again push to give taxpayer support to parents who send their children to private schools.

During a speech at the Iowa GOP’s state convention this weekend, Reynolds aired a litany of complaints about public schools.

“Drag shows for young kids, pornographic books in school libraries, elementary school lessons on pronouns and, sadly, the list goes on. This has to stop,” Reynolds said. “…Ultimately, we’re going to make sure that every parent has a choice in their child’s education.”

The group One Iowa Action issued a statement a few hours later, saying the governor’s remarks were “inflammatory” and “targeting LGBTQ youth.

On Saturday, Reynolds spent a segment of her speech reviewing the income cuts she signed into law in March. “I’m going to get a nod from all the legislators here, but guess what? We’re not done yet,” Reynolds said, to cheers.

Reynolds will face Democrat Deidre DeJear on the General Election ballot. Reynolds did not mention DeJear by name, but called her “my opponent.”

The Iowa Democratic Party will hold its state convention Saturday in Des Moines.