You are here: Home / News / The heat is on, NWS issues advisory 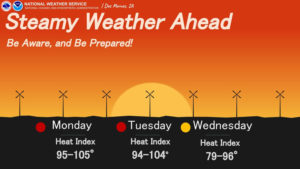 The hottest weather of the year so far is forecast for Iowa today and tomorrow.

A Heat Advisory will go into effect at noon for much of the state, lasting until tomorrow night. Meteorologist Kristy Carter, at the National Weather Service, says it’s already steamy and it’s only going to get hotter.

Carter says there should be a little relief in the high temperatures midweek. “This heat will stick around tonight into tomorrow,” Carter says. “We’ll have a little bit of moderation, although not that much. We’re still looking at temperatures in the 80s to maybe low 90s on Wednesday and then 80s Thursday and Friday, but we’re looking at another warm up into next weekend.”

Carter offers a few nuggets of advice for beating the heat.  “Drink plenty of water even if you’re not thirsty,” Carter says. “Never leave like a kid or a pet and an unattended vehicle. Those temperatures are going to get really hot, really fast. If you are outside or working outside, try to take frequent breaks, stay in the shade. Wear light-colored clothing, do anything and everything you can to keep yourself cool out there.”

The six-to-ten-day outlook calls for above-normal temperatures for Iowa through June 22nd. Summer officially arrives on the 21st.