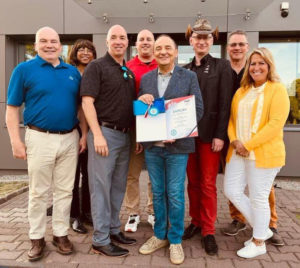 A delegation of Iowa Department of Corrections staff have just returned from a trip to Poland for an international conference on prisons.

Tennie Carlson, of Stratford, is a corrections officer with the Second Judicial District Department of Correctional Services. Carlson first went to Poland in 2019 as part of the Polish-American Development Council, which deals with the mental health of inmates.

Carlson says, “It was my first opportunity to travel to Poland and educate them on the risk assessment that the Department of Corrections uses in assessing our clientele to determine their risk factors, their return to the community, if they’re likely to re-offend and that type of thing.”

Carlson says Poland wants to bring its prison system up to modern standards, and doing a risk assessment is a big part of that. “Poland does not have the luxury of those assessments so they really crave that information,” Carlson says. “They want to know more. They want to educate themselves on identifying those risks and then treating those offenders or clients according to their risk.”

Offering an inmate too much help upon their release can backfire, she says. “Statistics show that if you offer low-risk clients a lot of services, they’re more likely to become more criminal,” Carlson says. “So you want to make sure that your dosage of treatment matches their area of risk and their need of risk. Iowa does a great job of identifying that and providing the correct dosage of treatment to our offenders.”

Carlson says a delegation of Polish prison officials will be visiting Iowa in the fall to take tours and exchange more ideas.