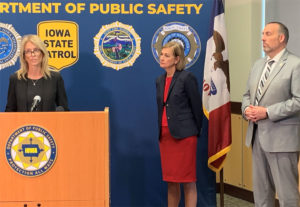 “Across the country, there’s a sense of urgency just with the acts of violence that we see taking place every single day,” Reynolds said during a news conference this morning.

The state is buying software to monitor school threats online and will provide an app, website and phone number that lets people anonymously report concerns. And $50,000 will be distributed for each school building in the state, to cover security measures. Nine people are being hired for a School Safety Bureau being established in the Iowa Department of Public Safety.

“Every family should be able to confidently send their children to school knowing that they will be safe,” Reynold said, “and as the governor of Iowa and a grandmother of school-aged children, I want to assure parents that your childrens’ safety at school is just as important to me.”

Reynolds had asked legislators to create an Iowa School Safety Bureau a few years ago and she’s now using federal funds to set it up. Every public school district and private school in Iowa will be offered an emergency radio for every school building, to communicate directly with law enforcement if there’s a security threat. Public Safety Commissioner Stephan Bayens said the goal is to identify concerning behaviors early.

“Unfortunately we live in a time when we can no longer simply assume that our sheltered havens of schools will remain safe,” Bayens said. “Rather, we must be intentional about providing concrete training, tools and assistance so that every school, regardless of its size, can provide the environment needed to feed these hungry minds.”

Bayens’ agency will provide active shooter training to “anyone” who requests it. “The governor’s School Safety Bureau will facilitate training, free of charge, to law enforcement, first responder, schools, houses of worship and civilians,” Bayans said.

None of this new spending announced today will be directed to mental health programs. The governor said school safety, though, requires addressing the mental health needs of students. According to a news release from the governor’s office, state spending on the mental health system will increase by nearly $3.5 million over the next 12 months.

“The debate on guns will continue,” Reynolds said, “but until we consider the lethal weapon in these events is the person who picks up the gun and turns it against another, we risk overlooking other solutions that directly address the cause.”

Reynolds cited a recent survey which found 24% of Iowa 11th graders had thought about killing themselves in the past year. University of Minnesota research indicates many teenage mass shooters had contemplated suicide and ultimately redirected their self-loathing into hatred of others.