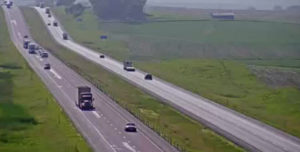 The report on vehicle travel from the DOT is showing some impact on the state roadways.

Stuart Anderson told the Transportation Commission Monday that municipal traffic in recent months has lagged behind pre-pandemic levels — reflecting long-term trends now of more teleworking.
“We did see in April an across the board and drop of about two percent in traffic counts statewide. And that was was really across the board and between rural and municipal,” Anderson says.

Anderson says the higher cost of driving is likely behind the drop. “That correlates really well with when we started seeing the big bump in fuel prices. That’s not inconsistent with what we saw the last time we saw a big increase in fuel prices back in the 2008-2009 time frame when I think traffic dropped to about five percent,” he says.

He says the work-from-home trend is probably why the gas impact isn’t as big this time. “We may see a little more moderate of a drop since we already have a lot of people teleworking. So maybe that will temper this a little bit,” Anderson says.

May traffic counts didn’t drop as much as April, and Anderson speculates that’s due to Memorial Day travel. “Kind of the desire to travel over the Memorial Day weekend overrode the fuel price concerns. So maybe that’s a little bit of what we’re seeing in May, June data will be more perhaps meaningful about if there’s some more significant trends in travel based on fuel prices,” he says. Anderson says that’s very likely as gas prices have continued moving up after the holiday and into June.